CONTENT WARNINGS: Violence, body horror, death, major character death, child death, animal death, torture, war, genocide, nudity, sexual content, religious themes, drug use, underage drinking/drug use. I rate this series T for Teen. While this is a story about the end of the world, the limited artwork and age of the piece make it quite tame compared to todays standards.

SPOILER CONTENT: No spoilers in the first review! But for every review after this you must have read at least the original Devilman manga (or have watched Devilman Crybaby back in 2018). Either is fine.

Hi!!! Welcome to the first installment of the DevilBlog! We’re starting off with the obvious choice: Devilman (the manga, 1972). So let's just jump into it [insert drawing of me as phillip defranco] 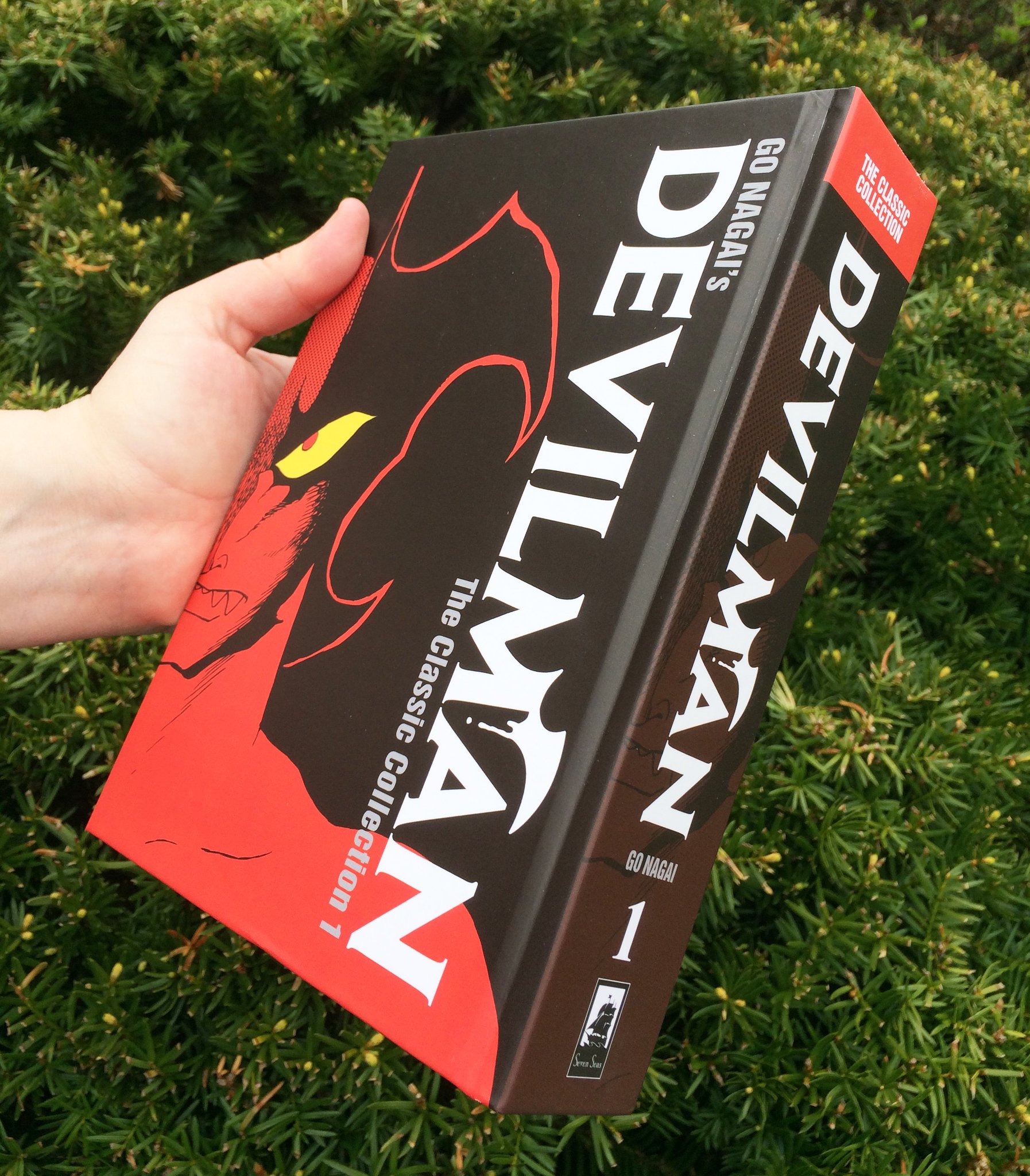 This is a re read for me, I’m enjoyed it via Seven Sea’s gorgeous hardback Classic Collection. The books themselves are quite lovely. The paper and ink are really high quality, resulting in striking black and white contrasts. The colour pages are just to die for. However, there are some very notable (and kind of odd) alterations Seven Seas made to the story, which I will discuss more at the end of the blog. While I suggest you read the fan translation for the full Devilman experience, these books are a lovely collectors item and great for any casual fan as well.

Onto the actual manga!

Akira Fudo is a bit of a crybaby. He’s a bookworm and a softie. But after his bestie Ryo Asuka comes to pick him up from school after a month MIA and takes him to a rave in his dad’s basement his whole life gets turned upside down as he becomes DEVILMAN!!!!!
The 1972 manga often gets ripped on for its bizarre facial expressions and Ryo’s habit of just blurting out random shit. But honestly? The art is actually really good. Once you get past the occasional funny face you realize that Nagai is very skilled at page layouts and creating suspenseful, stressful situations. As you get further in his talent for portraying indescribable emotions becomes apparent. With such a simple art style he can convey what words can’t.

Without spoiling any fun stuff for newcomers (why are you reading this if you haven’t consumed a single deviled man? How are you only just now finding out about devilman through my shithole website?) The characters are by far the most important part of the series.

Akira Fudo is a sweetheart who cares for his friends and family with his entire heart. He loves humanity and would do anything to protect them. He keeps faith in his loved ones until the very end, and even then he still wants to try to understand them.

Miki Makamura, Akira’s friend who’s family he is currently living with, is kind of a badass. She’s sassy, she’s a little bit perverted, and she takes no shit from no one. She’s a great contrast to Akira. Miki is a fearless human, ready to get into a fight at a moment's notice despite being powerless. While Akira is a crybaby devil, the strongest weapon at mankind's disposal with an aversion to violence.

Ryo Asuka is the original pretty-light-hair-gay-boy-who-is-absolutely-insane-and-ruins-your-life. I joke about him being unhinged, but a lot of that comes from Nagai’s odd facial expressions in the beginning of the manga. It’s difficult to pin down his personality. He’s Akira’s best friend and guide. He wants to be in control and help Akira save humanity, but he also depends on Akira for his own comfort and sanity.
I think something that drew me a lot to his character as a teenager was his internal conflict and confusion at his identity. Feeling like an alien, like you aren’t a real person was a very relatable struggle for me. It kind of still is.

Another character I want to highlight is Sirene the Harpy. Her arc always sticks with me. The love she feels for Amon, the fear she feels at fighting Devilman. Much like how Devilman’s story is a story of love, Sirene’s short story is also one of love.

Re-reading this I was surprised at how many little details I’d forgotten, and how much of the series I’d taken for granted. You can see Devilman’s influence, especially in its depiction of the apocalypse, in so many modern anime. The most obvious that comes to mind is of course Evangelion. The betrayal, the sorrow, the raw animalistic depictions of love and hate. There’s a reason this manga has stuck with so many people for so long.

It’s also quite shocking how relevant Devilman’s message still is today. Even more so in recent years. Devilman is a story about war and mistrust. About the potential evil every person has inside of them when controlled by fear. But unlike most stories whose message is “whooowa humans were the real demons all along. We’re the virus!!!!!1!!111!!!” Devilman is also a story of hope. Hope to understand your mistakes and make things right.

Seven Seas VS Fanlation (this is basically just rambling)

After reading the Seven Seas copy I felt like some scenes were missing. Or maybe I had just imagined them. But I was in fact correct! Some scenes from the original manga have been cut so that the spin off manga Shin Devilman, as well as a few random side stories could be added. To give a better review I decided to do a quick flick through the fan translation to see what was added and what was missing.

The additions:
Shin Devilman: The entirety of Shin Devilman, Devilman’s first official sequel manga is slammed smack bang into the middle of the series for no real reason. Ok I get that chronologically the events of Shin happened around that time, but it’s too weird. The tonal shift between Devilman and Shin Devilman is massive. You go from trying to stop the apocalypse to going time traveling with Akira and Ryo. I don’t like that it was added, not only because it’s weird to add, but also because it meant we won’t get a stand alone physical version of Shin Devilman. Kinda sucky. And yes, I do like Shin Devilman (yes it is the one where Ryo makes hitler hate Jewish people because he’s too slow and other culturally insensitive nonsense occurs) and I like it because it’s fucking funny. No really it is. It’s so stupid and it’s also very homoerotic. I acknowledge that it is horribly offensive in many parts but also you can never stop me laughing at Akira trying to rip Ryo’s tunic off and Ryo going kyaaa Akiwa~ stop it~. I’ll be reviewing this one next time so stay tuned.
The Side stories: The side stories included were One Summer Day, Fallen Angel and Collapse. I actually really really like the inclusion of these. I think it was a great idea and the story is better overall for it. If Devilman is ever reprinted, I want these side stories to remain.

The deductions/changes: Why does Seven Seas hate Ryo? I thought they were super into publishing LGBT manga. For reasons unknown to me, when Akira and Ryo have a conversation about if humans are lower on the food chain than demons, they cut off the conversation mid-way and go straight to… Susumu-Chan’s Big Shock??? Which is a totally non plot essential chapter. About a 1 time throw away character? This replaces the chapter where Ryo goes out to fight a demon he uncovered through his detective prowess, and attempts to stab it with an umbrella. This obviously does not work, but it doesn’t matter as he blacks out, and when he comes to the demon is gone. It feels very odd to remove this, as it shows Ryo’s declining mental state, as well as containing the first hint of him being more than just a guy who’s really into hunting demons. It’s also very funny and I only read things that make me laugh.
Then the Jinmen fight was moved forward an arc for seemingly no reason. So that the spider fight (which should come directly after Ryo’s umbrella murder party) actually comes after Jimen. But honestly that’s a non issue as I’m pretty sure the spider fight is removed in every animated version of the sirene-jinmen area of the story.
Another big change to volume 2 was the end of the spider fight? Like it’s a totally different ending in a different art style and I have no idea why. I’m not a devilman expert. 0 explanation for this one.
Once you move past the spider/jinmen issue, no other pages seem to be altered/missing/rearranged apart from a couple of background/atmospheric shots (I think). There are also alterations to the translation, but I think they’re all decent. It does remove some classic meme translations, but it also makes it feels a lot more serious and the flow is a little nicer.


This isn't really much of a review. But that’s mainly because everything that can be said about the 1972 manga has already been said a bajillion times in a bajillion better ways than anything I could ever write. Just go read it. Do it. Now. It’ll only take a few hours. It’s collected into two large volumes and it’s not a particularly dialogue heavy series. A lot of pages are taken up by atmospheric spreads or fight scenes with sparring dialogue. Which is good because I hate reading.

What can I say? It's the blueprint for the Devilman franchise as we know it today. Because of this, I’ll be using it as the flat line for my review of the coming series. Everyone please put your hands together for the debut of the patented, one-of-a-kind, DevilScale!!!!

It’s great! I had fun! You laugh, get angry, you get sad! It’s difficult to put down.

It carries itself well. Everything is in its place. It starts out silly and gets progressively more serious. The majority of the fuckery occurs at the very beginning and quickly peters out.

If you only read 1 piece of Devilman media, it should be this one.

And that’s it! Thanks so much for reading, and if you made it this far and haven’t read the manga yet, what are you waiting for??? Go do it!! Now!! Next time we’ll be going over Shin Devilman which was included split up throughout The Classic Collection print. So Stay tuned~